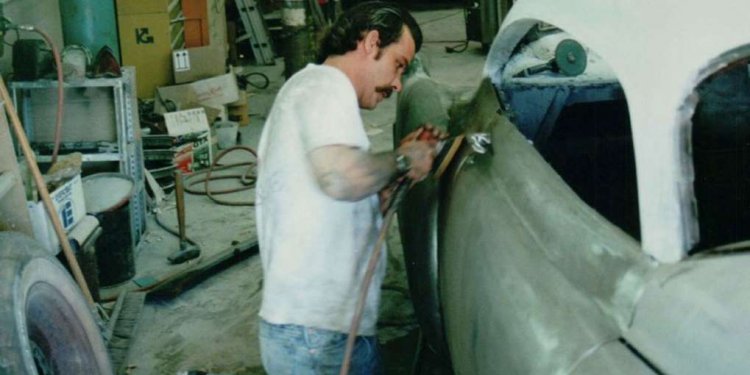 We meet the custom builder Rick Dore to talk radical styling, reworking classics and his latest creation, a French-styled beauty Shangri-La, which wowed the crowds at SEMA…

Rick Dore is a legend in the custom car business. His unique vision for changing lines, incredible eye for color and flair for the dramatic have made him the go-to-guy for high-end custom car fans for more than three decades. Lead singer for the heavy-metal band Metallica and long-term client, friend and car nut James Hetfield once said that Dore is in “a league all his own” when it comes to building custom cars. But that hasn’t always been the case, says the renowned builder.

“I’ve always had a thing for muscle cars, Detroit metal, ” admits Dore. “But my passion for customs didn’t actually emerge until I was well into my 30s.”

Dore attributes the delayed reaction to his meager beginnings. Born in the 1950s, he grew up on the Lower East Side of Manhattan. It’s a hipster’s haven today, but back then, it was rough. “The neighborhood wasn’t wealthy, ” recalls Dore. “Most of the people were working class, took trains or buses around. The only guys that had cars of any interest were those that made it back from Vietnam. They’d get home from fighting, get a GI loan, buy a Chevelle, Super Sport, Nova, Mustang, Corvette, something fast, and then be out on the drag strip in a week.”

However, a chance run-in with a custom Mercury changed his life and inspired him to do more than just tinker with cars. “It’s an old story, but I remember it like it was yesterday, ” laughs Dore. “I was sitting at a red light when a chopped 1951 Mercury pulled up alongside my nearly stock Buick. I couldn’t believe what I was seeing. It was a radical custom. Shaved. Smooth. It just blew me away. It had the word ‘Memories’ painted across the rear quarter panel. I chased the guy down, but never did get him to stop.”

After that, Dore went to the West Coast Cruise (now called the Cruisin Nationals) in 1985 where he met "Big Daddy" Ed Roth, Gene Winfield and Dick Dean. “These were people that I had previously read about and admired, ” recalls the builder. “They were legends in the world of custom cars and hot rods; I was just starting out.” After returning home (by this time Dore lived in Phoenix, Arizona), he was hooked and set out to craft cars that would measure up to the ones built by those icons.

His first hit was a 1957 Buick he called Lavender Persuasion (above), which debuted at the Grand National Roadster Show in 1993. “I got it stock in Ohio and brought it to Phoenix where I lived at the time, ” explains Dore. “We chopped the top, put Packard taillights on it and gave it a 390-cubic-inch Ford engine, automatic transmission and air ride suspension.”

The car won the title of “Most Radical Custom” at the prestigious show. “It got a lot of attention, ” says Dore. In fact, it ended up on almost every car magazine cover in the United States and Europe. “There’s no doubt I loved the attention, but it made me love the cars even more.” Since then he’s turned out at least 40 high-end, high-ticket custom vehicles.

Until recently, Dore’s specialty was rebuilding American cars from the 1930s to the 1960s. “We take a car that Detroit gave us and improve the lines they gave us, ” explains Dore. His latest creations have taken a more custom turn though, and as he explains, “We’re building complete coaches from the ground up." © Rick Dore