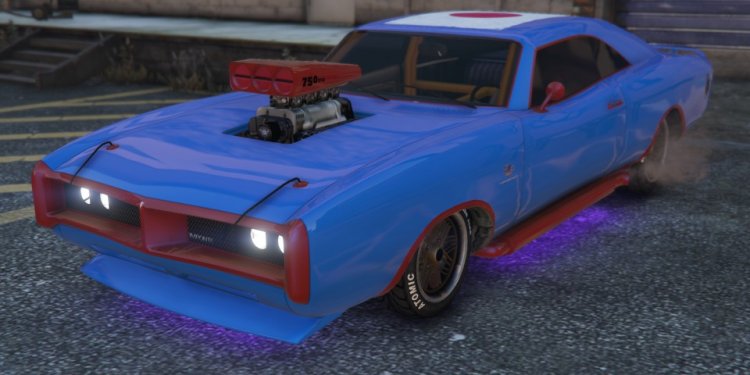 For most of us a car is just a means of transportation, albeit one that can hit triple digit speeds and/or cost as much as a small house. But for others a car is a means of expression, a rolling canvas that serves as an extension of your personality. There are dozens of trendy car modification cultures out there, and some are quite obscure.

Born and bred in the United States, Kustom Kulture is one of the longest-running subcultures out there — it has its roots in the early 1950s, and it’s still going strong. While the term itself is broad, as it can identify with anything from old-school drag racers to music or even DYI art such as pinstripping, a kustom car is easily recognizable when compared to other types of custom automobiles.

Some kustoms start out as a two-door coupe built anytime between the 1930s and the early 1960s, though most of them are from the post-war period and can also be sedans or convertibles. People involved in Kustom Kulture not only try to recreate the early days of hot-rodding with modified cars and motorcycles, but embrace other significant trends from the early 1950s, such as fashions of the day and early rock music, while also incorporating modern touches like tattoos.

Starting in the Land of the Rising Sun, VIP Style is also known as Bippu in Japan and was originally associated with members of the Yakuza. Over the years the trend was borrowed by regular folks as well, and nowadays it’s safe to say that most VIP Style cars you see on the roads don’t belong to criminals, just aficionados. VIP Style cars were originally comprised mostly of German and Japanese luxury cars with rear-wheel drive, with a vast majority sported black paint, a low height and large wheels.

Some say that VIP cars started becoming popular with non-Yakuza people after illegal street racers around Japan’s Osaka region began switching from flashy sports cars to stealthier looking sedans in order to evade police, and then things carried on from there. Their trademark is obviously their minuscule ground clearance.

There are a number of different stories as to how, when and where the lowrider scene actually started, but most of them agree that it was the late 1950s when Mexican-Americans from Southern California began popularizing the trend. One theory says that the method of dropping a car’s body as low as possible originated in 1930s Mexico, where zoot suit wearing locals were driving around in American and German cars with sandbags in the trunks to make them lower. Whether that’s true is still disputed, but what is known for sure is that So-Cal’s residents where doing similar things to their cars in the early 1950s.

A new law in the 1958 California Vehicle Code made it illegal for cars to have any part lower than the bottom of its wheel rims, and that law is considered to be the main reason behind the appearance of hydraulic or pneumatic suspension add-ons for lowriders. A resurrection of the lowrider trend took place in the late 1980s and early 1990s thanks to the West Coast hip hop scene, and nowadays lowriders are appreciated by a much more diverse group of people.

Oni-Kyan cars have the bottom of the tires sitting much farther out that the top, effectively supporting the car on a petite patch of rubber. A direct translation of Oni-Kyan would be Demon Camber, a Japanese tuning style that’s somewhat new among Japanese domestic market aficionados. Some say that it originates from the 1970s drift scene, when drifters used to stretch narrow tires on wider rims and would also add extra bracing on the suspension in order to achieve better handing during powerslides.

Over the years the trend has become much more extreme in nature, partially helped by the fact that the aforementioned VIP Style and the rebellious Bosozoku have adopted and taken Oni-Kyan to the point where the angled tires create nothing but disadvantages for handling. With that being said, the Oni-Kyan trend seems to actually be getting more popular, despite the fact that it’s both dangerous and rather expensive — tires with extreme angles last for only a few weeks of normal driving.

Also known as hi-risers or sky-scrapers, donks are another American style that grew out of the South Coast hip hop scene in the Southern United States. They’re usually created using older American sedans, but in recent years the trend has encompassed modern European and Japanese cars, and SUVs as well. Cars sporting these funky modifications are fitted with disproportionately oversized wheels that range from about 26 inches to a comically-massive 50 inches, flamboyant paint jobs and powerful stereo systems.

Lifting a vehicle’s suspension issues a number of challenges both before and after the work has been done, as the car’s much higher center of mass makes it unstable during cornering and at higher speeds. Donk riders also share a specific slang and fashion sense, with those in Florida being fans of dreadlocks or cornrows and gold grills.

The last place one would expect to find a bunch of middle-aged men with rockabilly clothing and hairstyles drinking beer and discussing their 1950s American cars would probably be Sweden. They’re called Raggare, and over the years it’s moved into other Scandinavian countries — to them, the rock’n’roll movement never disappeared. There are even rumors that the number of restored ’50s and ’60s American cars may be higher in Scandinavia than in the entire USA.

With “raggare” essentially meaning “to pick up girls” in Swedish, you can guess that a decent amount of partying is involved during meets. The biggest one happens annually in July, when over half a million people and thousands of classic American cars gather in Västeras for the Power Big Meet. Most “Yankees” they use look like they’re straight out of American Graffiti, but you can also find a few European brands like Mercedes-Benz and even old Volvos.