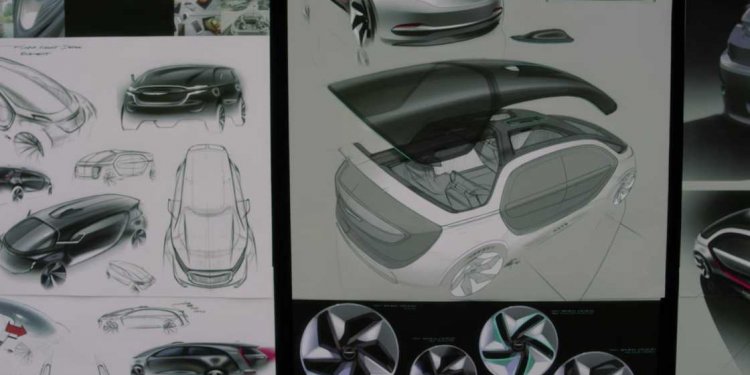 The modern Mini, the original Ford Taurus, and the Ferrari F430 are just a few of the iconic cars styled by the program’s talent

It’s a few minutes before midnight on the first Sunday in December, and Room 216 at ArtCenter College of Design is a bright workshop full of manic energy and the acrid odor of drying paint. Clipped conversations in English, French, Italian, Korean, and Mandarin float above a rising undercurrent of tension. Several eighth-term seniors wearing respirators hustle back and forth from nearby paint booths. Others, helped by conscripted friends and relatives, feverishly sand, stripe, and assemble the scale models that represent not only their visions of the automotive future but also their hopes for a toehold in the car design industry.

These aren’t flimsy plastic replicas built from kits. Sculpted out of clay or milled from foam, the models are larger than microwave ovens, and they’re sprayed with paint so lustrous that they still appear to be wet. They’re the product of three months of painstaking effort, and they represent the final step each of the school’s transportation design majors must take before graduating next week. There was a similar scramble for other seniors in April.

“It’s been a nightmare, ” Giancarlo Foschetti says of the see-through lattice bodywork he’s fashioned for a Mercedes-Benz supercar. He exudes an easygoing vibe that’s at odds with his imposing six-foot-six-inch frame, black beard, and visible weariness. “I just didn’t want to be a stage monkey who does what he’s told and ends up with the same thing as everybody else. I wanted to do what I wanted to do and add something of my own. That’s what the car companies are looking for. In a way, these models are a job application.”

ArtCenter houses what’s arguably the oldest and most influential transportation design program in the world. The school’s location in Pasadena is one reason almost every automaker has a design studio in Southern California, and you’d struggle to find a single manufacturer without a few alumni on staff. The split-window Corvette, the Boss 302 Mustang, the original Ford Taurus, the Audi TT, the BMW Z8, the modern Mini, the Lamborghini Murciélago, the Ferrari F430—all of these iconic cars were styled by ArtCenter talent.